Uniquely in Ireland, The Gospel Project is not a subset of a larger choir, but a standalone 6-piece ensemble. At each and every wedding ceremony you are guaranteed six professional musicians – 2 male singers, 3 female singers and our piano player – and, barring last minute bookings or illness, it is virtually always the same 6 people. As were are all multi-instrumentalists, the line-up also provide guitar, violin,  and percussion. So who are we? 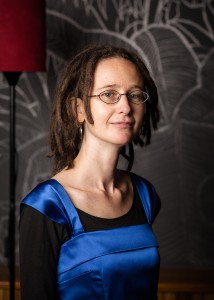 Cathy is a full-time musician, arranger and composer and has been playing fiddle for most of her life. She holds a Music degree (honours) from Trinity College, Dublin, and a Masters in Composition from N.U.I. Maynooth. She is Musical Director of  The Gospel Project,  Gardiner Street Gospel Choir,  Sandymount Gospel Choir, the Waltons School of Music choir, the Deparment of Enterprise Workplace Choir and the Portmarnock Singers. She is on the Artists’ Panel for the National Concert Hall’s Music in Mind programme, and has worked as a choirmaster at the Abbey Theatre , the Gaiety School of Acting, the Civic Theatre and with RTE Radio Drama. She has also just been appointed Artist in Residence to Dublin City Council/LYCS for 2022/23 and has been the recipient of a number of Arts Awards including: the Agility Award from the Arts Council of Ireland, Meath County Council Regional Bursary Award, and an EU Connecting Through Creativity Bursary. In addition, Cathy maintains a busy schedule as a freelance fiddle player, performing with a great number of traditional, roots and bluegrass bands, including The Whole Hog, as well as the Dublin Symphony Orchestra, among others. Well-known artists with whom she has performed include the Manic Street Preachers, Mary Coughlan, Bill Whelan, Don Baker and Eleanor McEvoy.  Cathy’s current EP, Letters to Loved Ones, is available on the MOSCO Label. 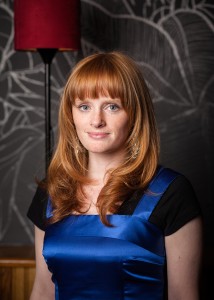 Sadhbh O’Sullivan is a vocalist, musician and songwriter and has been performing in bands since her school years. She studied contemporary music performance at Ballyfermot College and Fontys Hogeschool in The Netherlands and holds a Masters in Community Music from the University of Limerick. To date Sadhbh has released two collections of original music to critical acclaim (‘her voice sweeps along displaying folk and jazz nuances with the confidence of one who knows’ – Eamon Carr). She has toured in Ireland, The UK, Europe and New Zealand, opened shows for the likes of John Spillane, Mick Flannery, Gemma Hayes and Kila and made an appearance on RTE’s Other Voices in 2014. When she’s not busy with her own music or The Gospel Project, Sadhbh can be found working as a session singer/musician, performing with her jazz duo Calliopa or facilitating songwriting and recording workshops with young people. You can listen to her music at www.sivemusic.com 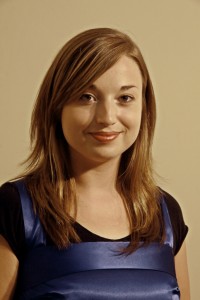 Throughout her school life, Amy was an active member of various choirs and harmony groups, performing frequently at ceremonies in the church of St. John The Baptist in Clontarf. On finishing, she promptly entered the Dublin cover-band scene, singing with different rock, blues and soul outfits. While studying Music Management in Ballyfermot College, Amy landed a job as a backing singer with a small Irish label which led to her performing in many venues in London, including Ronnie Scott’s Jazz Club. In 2008, she went on to front Dublin based funk- soul extravaganza Upbeat Generation. Amy has given numerous vocal workshops in Loop Studios and her vocals can be heard on many original projects. She’s currently performing all over Ireland with The Gospel Project and Upbeat Generation, among other wedding bands. 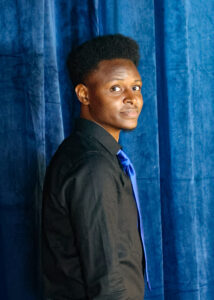 Daniel Kamenyezi is a vocalist, musician and songwriter. He started singing in St Jean Paul 2 Gospel Choir in DR Congo (Bukavu/Kadutu) in 2013 and has been performing in both solo and ensemble line-ups ever since. He was nominated best singer of the year 2019 in the school he attended and was a prize winner in a musical competition organised by St Egidio group. He is a self-taught musician and always ready to learn new stuff (Editorial note from Cathy: Daniel is probably the fastest learner I’ve ever met!)

Since arriving in Ireland in 2019 he has performed as a soloist with Gardiner Street Gospel Choir, been recruited by The Gospel Project, and become actively involved in the spoken word, poetry and dance scenes in Dublin, with traditional and afro dance a particular speciality. 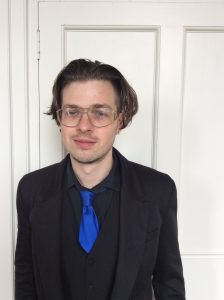 Paddy is a multi-instrumentalist & producer, and has played in a variety of crossover bands like traditional Irish award winners Ensemble Ériu, Congolese guitarist Niwel Tsumbu’s RiZa, West-African group Manden Express, Dave Flynn’s Clare Memory Orchestra alongside Martin Hayes, groups Loah, Fehdah and Danny G & the Major 7ths – In these groups playing support to Thundercat, Hiatus Kaiyote, Taylor McFerrin, M People & Billy Ocean. Paddy released a solo guitar EP in 2016 and his folk/jazz group, Leafzang, released their eponymous album in 2011. He is the lead singer of Paj, his original ‘blue-eyed soul’ band that draws from R&B, jazz & world music. Known for collaborating across genres in a sideman role, 2019 marks the debut release of Paj and his stepping into centre stage.

A Fulbright student at the Berklee College of Music, Boston, most recently he completed a Masters degree in Global music & pedagogy at the Sibelius Academy, Helsinki, with research trips to North Brazil & Mali, West Africa. 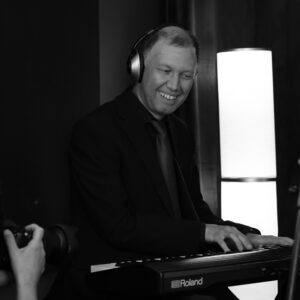 Michael Fay is a pianist, choir director and composer with years of experience in the industry. Michael has a B.A. in Music from NUI Maynooth as well as a B.A. in Jazz Piano Performance from Newpark (Now DCU Jazz). He is Musical Director for the Maynooth Gospel Choir, Bray Gospel Choir, and Heartbeats (Tallaght University Choir) amongst others. He has worked with acts such as Jack L, The Magic Tenors, Johnny Logan and Celtic Nights in various capacities and tours, including a stint at the Edinburgh Fringe Festival. Michael is also known as Musical Director in the Musical Theatre Industry. This includes Guys & Dolls (Naas Musical Society)  for which he was nominated for an AIMS award in the Best Musical Director category and  Godspell (Clane Musical Society), which won Best Chorus among other awards at the 2015 AIMS awards.